A PILGRIMAGE, AN UNDERGROUND TREEHOUSE, AND AN ACT OF GOD! 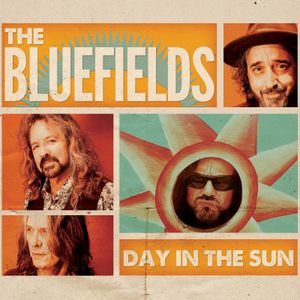 The Bluefields: an American rock band from Nashville, Tennessee. Their rock and roll story might be as pure and simple as the prior statement if it weren’t for the fact that the combined band members’ resumes boast platinum record success, a Grammy nomination, an Americana Hall of Fame Lifetime Achievement Award and song authorships that have become iconic, rock and roll standards, making this band far from simple. Comprised of rock veterans, Warner E. Hodges on lead guitar and vocals (Jason and the Scorchers/Homemade Sin), Dan Baird on bass, guitars and vocals (The Chefs/The Hangfires/The Yayhoos/The Fossils/Georgia Satellites), Brad Pemberton on drums (Steve Earle, Iodine) and Joe Blanton on lead vocals and guitar (The Hangfires/Royal Court of China), these southern bred rockers remind you why you love rock and roll in the first damn place!

The Bluefields 4th album, Day In The Sun is now available at our store and through just about any digital service imaginable! It's been 6 years since the release of Under High Cotton and we are excited to release our newest collection of crazy, no holds barred music. We hope you will enjoy the vibes too! Be a trendsetter and order your copy HERE. We truly appreciate your support of our musical endeavors. The Bluefields made 3 rare appearances on the Outlaw Country Cruise 5 disguised as The Warner E. Hodges band! Rumor has it that Bad Old Days, Wish It On Me, and Blowin' Sunshine were played. We're just one big happy family here at the Underground Treehouse. Be on the lookout for a Compilation album featuring our Bluefields fave's and a couple of new songs to boot!

The Beginning:
In order for The Bluefields to be born, certain stars had to align. For starters, Joe had to move back to his native Nashville and reconnect with his buddy, Warner, whom he had not seen or spoken with in well over a decade (as teenagers, Joe and Warner had become friends during Nashville’s fledgling punk scene). Once reunited, Warner would need to introduce Dan to Joe (Dan and Warner were on hiatus from touring abroad in Dan Baird and Homemade Sin) and, let’s face it, the three would need to “click.” Fueled by an almost instant camaraderie, this newfound band of brothers went to work in Joe’s basement studio that they dubbed the “underground treehouse” and in the winter of 2011, unwittingly began writing what would become their debut album Pure.

Repair My Soul from Pure

“First, I had to get over the fact that two of my favorite musicians were sitting on my couch,” says Blanton. “These were my contemporary rock heroes that were nonchalantly strappin’ on guitars in my basement. We wrote every day that first week. Ideas flowed freely and we attacked them like rabid dogs. I remember thinking that the second song we worked on (Flat Out Gone) came out so fast and powerful that if it were a car, it would be a black ’67 Shelby GT Fastback! I literally had dreams of songs inspired by something Warner or Dan had inadvertently said the night before. The next day we would take those ideas and burn through them in the studio. We were on fire.”

“A typical day (or night) in the Underground Treehouse might go something like this,” says Baird. “I might come in with a Neil Young-ish chord structure that I’d been saving for years. Having no idea where the music and lyrics would end up, the three of us would simply start talking about our lives. The lyrical direction for Lay It on the Line began when Warner blurted out, “God cut me a break” based on something he was recalling from his past. As a matter of fact, that song has The Bluefields blueprint all over it…Starting in one direction, taking a sharp left turn, then jerking as hard as possible to the right, only to return to center without losing an ounce of emotional continuity.”

The Music:
Expressive freedom permeates The Bluefields’ four sensational albums; Pure, Ramshackle, Under High Cotton, and Day In The Sun, all recorded in Nashville, at the Underground Treehouse. Hodges recalls, “I was almost defiant in my desire for the band to push the envelope stylistically and not come off sounding like ‘Joe and the Scorchallites.’ As we started writing Pure, Dan introduced me to the secrets of JPOT (Jimmy Page Outdoor Tone) which really got the creative juices flowing. We began exploring a lot of different tunings and twelve strings and songs like Repair My Soul and Bad Woman Blues just seemed to come naturally from this process.” When asked about how their process has evolved from Pure to the writing and recording of Ramshackle, Blanton added, “The writing process was amazingly fast and natural and since we know each other so well, we’re completing each other’s sentences. We all had great ideas and with the addition of Brad, were able to work them up as a band. We also know more about what The Bluefields mean to us as a band and creative forum. We kept our anything “good” goes approach and Ramshackle is a prime example of this spirit. When Warner brought in a ukulele, Dan and I didn’t bat an eye. In fact, I believe we had the same “evil grin” response. Ramshackle is righteous rock and roll fun…period!” Blanton also stated, "The making of Under High Cotton was unique in several ways. Dan wanted to record a new Homemade Sin album and suggested that we take a page out of the Nick Lowe/Dave Edmunds/Rockpile playbook. Basically, we wrote a bunch of songs and then sorted them out according to which ones fit Homemade Sin's or The Bluefields style the best. The whole process was very fluid and organic." Hodges adds' "We had more time between the writing and the recording of Under High Cotton so we used it to be more experimental regarding guitar tones and instrumentation. Even though we stayed true to our "why not" approach to trying new things, we also utilized the "less is more" philosophy. It's amazing how powerful and emotional music can get when only the most important elements remain." The band's 4th album, Day In The Sun, continues the bands no holds barred philosophy and showcases some of the band's best guitar work yet, and that's saying something. The album features 11 new tracks with songwriting contributions from all 4 members.

Back porch promo for If Not Now When

Blanton delivers the majority of the lead vocals on the band's four releases. He brings an unabashed fearlessness to the projects as his voice instinctually navigates between “straight up, in your face” rock to swampy blues deliveries to punk rock primal screams…all with an unapologetic southern accent. Dan Baird’s vocals are just what you hope they’ll be…Dan Baird vocals! Time has served to make this distinctive rock voice better, grittier, “rawer” and well…even more timeless. And when he and Joe switch up and Dan takes the lead on Belong and Lay It On the Line (from Pure), it “hits the spot” and instantly renews your faith in the rock ballad.

Add to this concoction, the trailblazing guitar work of Warner E. Hodges and you better hide the matches! Hodges’ signature gunslinger style of playing can go from the genre-bending American roots rock that he and the Scorchers are credited with inventing, to monster riffs raging like a Tasmanian devil teetering on the edge of chaos…and all in the same song! Current Steve Earle drummer, Brad Pemberton, has over 50 albums recorded to his credit, and was just what the doctor ordered! No matter what musical back road The Bluefields travel, he drives the groove home with power, grease, and precision.

Underground Treehouse promo for Lay It On The Line

Studio and writing chops aside, these boys know how to bring it when the lights go down. Each known for their electrifying presence on stage, one can only describe the combination as a force of nature. Fans (or “Bluefielders” as they call themselves) have been heard commenting that attending a Bluefields show is like watching a rock and roll clinic…being “schooled” in all things rock; from songwriting and live execution, talent, and showmanship, to bone-rattling, mind-jarring, head-banging rock intangibles.

In many ways, the story of The Bluefields is like that of a perfect storm…“an act of God,” if you will. In an unpredictable world, it seems somehow perfectly logical that these guys should meet, that they should form a band, convene in an underground treehouse, create stellar music and inevitably turn out a brand of rock and roll that could not have been prevented by the exercise of foresight and caution and for which no one can be held responsible.

Out on the back deck of the first Underground Treehouse in The Bluefields neighborhood in Donelson, TN.

Day In The Sun: The Bluefields

The new record from one of the south's finest hot messes! 11 stone cold crazy ass rockish tunes that will make you ponder the mysteries of life itself!

The new record from one of the south's finest hot messes! 11 stone cold crazy ass rockish tunes that will make you ponder the mysteries of life itself!

The third studio album from The Bluefields! This one goes to 11! Songs, that is! Play it LOUD, Play it often! You just might fall in love, get rich, conquer the world or maybe just enjoy life a little more. Who knows? All we know is this record KICKS ASS!

The third studio album from The Bluefields! This one goes to 11! Songs, that is! Play it LOUD, Play it often! You just might fall in love, get rich, conquer the world or maybe just enjoy life a little more. Who knows? All we know is this record KICKS ASS!

The Bluefields second album Ramshackle. If you liked the first one...You'll LOVE this one! Available NOW!!!

The Bluefields second album Ramshackle. If you liked the first one...You'll LOVE this one! Available NOW!!!